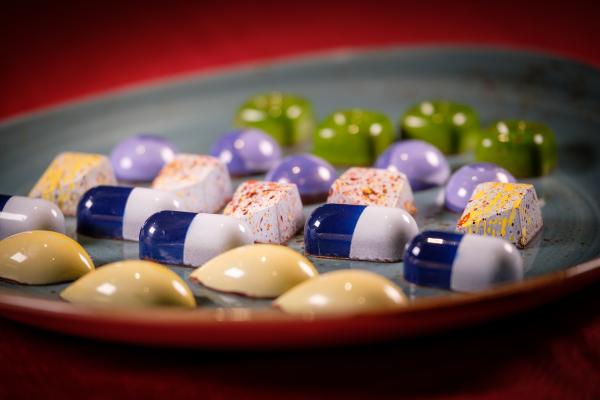 As if the Okanagan Champagne Powder, the snow ghosts and the completely ski-in-ski-out Village weren’t enough to make Big White Ski Resort stand out, we are also the first ski resort in North America to have our very own chocolates – dreamt up, designed and distributed by Executive Chef Rob Walker.

In 2017, Chef Walker visited the prestigious Cacao Barry Or Noir laboratory in France with the goal of bringing back a signature chocolate the resort could call its own. Big White has been playing with the chocolate in its menus since receiving it in May 2018, and over the winter season, you can expect to see more chocolate-y goodness pop up all over the resort.

“I went in there tasting raw cocoa beans and raw liqueur from all over the world,” says Chef Walker, who is only one of two non-pastry chefs in the world who has been accepted into the program. “You sort of think you’re going one way, but once you get in there and taste beans, next thing you know, it’s completely different from what you went in there and thought you were going to develop.”

What he came out with was two recipes: the first, a 43 per cent milk chocolate called Monashee Milk; the second, a 68 per cent dark chocolate called Alpine Noir. “I tried to develop recipes that are sort of guest-friendly and recipe-friendly at the same time,” Chef Walker says. “Sometimes dark can be too far one way and be really hard to bake with. Milk sometimes can just be too sweet. So it was really about finding a balance.”

Chef Walker developed the recipes from seven organoleptic notes (aromatic, fruity, etc.) and 20 secondary notes (spicy, floral, liquorice, etc.). His milk chocolate, he says, is not too sweet, with notes of caramelized honey. The beans for the milk chocolate came from Ghana, the Ivory Coast and Ecuador. The dark, with beans from Santo Domingo and Mexico, has fruity undertones and isn’t too bitter because it’s still under 70 per cent cocoa.

Leigh Holuboff, Big White’s pastry chef, has spent the past few months putting her own culinary touch on the chocolates – transforming them into menu items around the resort, including cookies, muffins and desserts at Big White restaurants. The award-winning graduate of the Okanagan College Culinary Arts program is in her second season with the resort, but has been baking with her grandma since she was a child – and since graduating, has taken classes and workshops specific to the art of chocolate.

“Every chocolate is a bit different,” Holuboff says. “This chocolate took me a while to learn how to temper. Humidity, dryness, elevation – I’ve really had to adapt to working with it up here and learn different ways of doing things.”

Find Big White milk and dark chocolate in the pastries at our coffee shop in the Village Centre Mall. Dip one of our Monashee Milk cookies into a Tug No. 6 cappuccino. Bring an appetite, because the cookies are giant and have perfectly melted chocolate chunks, so you’re not going to want to save any for later.

Since everyone should enjoy Big White chocolate, regardless of dietary restrictions, Holuboff devised a decadent gluten-free, vegan brownie that you can hardly tell is gluten-free and vegan, available at Black Forest Day Lodge and Clocktower Coffee.

Walker and his team of chefs, including Holuboff, use the chocolate in savoury dishes for VIP dinners and special events. Holuboff also transforms the chocolate into colourful bonbons – with flavours like passionfruit and earl grey.

Walker says there’s a lot more than just chocolate goodies in store for guests when it comes to Big White’s food and beverage scene. “It’s all part of the bigger picture,” he says. “Not just the chocolate – we’re really trying to elevate the dining. It puts Big White on the map. We have great skiing and are a great family resort, but we also have a great food program up here and hopefully compete with the best restaurants around.”

On March 6, Holuboff is hosting a Chocolate Masterclass as part of our inaugural Gourmet Ski Week. Guests will learn how to work with chocolate and use it in recipes – plus taste it in chocolate cocktails, snacks and treats. Tickets are $25 for the class, and $699 to attend the 3-day, 4-night culinary escape.