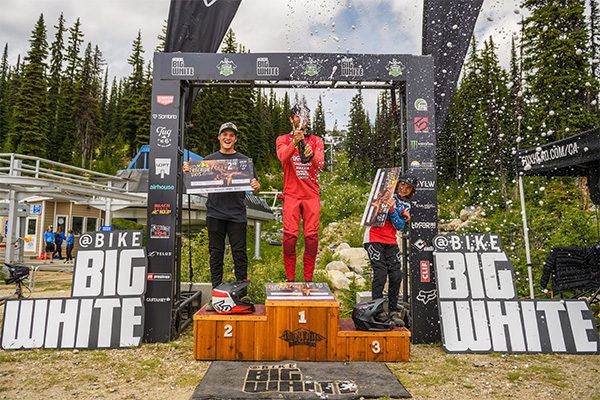 Sunday July 14th marks the end of the inaugural Freeride Days at Big White Ski Resort presented by Monster Energy. This year was a year of firsts as many of the events have never been done at Big White.

The event kicked off on July 11th with the Bronze Open Slopestyle finals which drew a crowd of aspiring riders from all over the world in hopes of winning highly sought after FMB points to help them move up the rankings to Gold.

The Bronze Slopestyle event is only one of 9 in North America so the stakes were high as the riders try to win the points needed to move up in the rankings. To add to the pressure the top 5 riders got to compete in Saturdays Big White Invitational Slopestyle hosted by Tom van Steenbergen and presented by Five Ten. By the end of the day it was Liam Wallace who took top spot with a 91.00. Wallace would then go on to finish a respectable 18th in the Gold finals on the Saturday.

Friday the 12th is when things kicked into high gear as the world’s biggest Women’s Slopestyle contest was held on the FMB Bronze sanctioned course. With few Bronze level slopestyle courses existing in the world, the female athletes had never been given a stage this large to compete on and it brought out the best. Canadian Stephanie Nychka topped the podium with a score of 83.33 followed by the two Americans Ming Goetz (74.00) and Jordan Scott (71.66).

“This is historical that Big White is supporting this [slopestyle] for women too! To be one of the first women on the podium during our women’s slopestyle tour is huge. For every girl here this event is pivotal” - Stephanie Nychka

Best trick presented by ODI came up next and Robin ‘Rambo’ Davis blew minds with his world’s first backflip-barspin-tailwhip-barspin winning him the top spot over the rest of the stacked field of riders.

Saturday the 13th was the day of the big show – the Big White Invitational Slopestyle hosted by Tom van Steenbergen and presented by Five Ten. The sun shone bright and a crowd of over 5000 packed into the hillside venue in the Slopestyle Center at Big White to watch the best mountain bike athletes in the world battle for gold. German Erik Fedko, American Nicholi Rogatkin, and Swede Emil Johansson put on a show in the gold event with Johansson coming out on top of the pack with his impressive run of 95.66. Johansson has battled injuries and an autoimmune disease that sidelined him for the entire 2018 season.

“Finally, Soo Stoked!!! It’s so emotional getting on that top spot again” – Emil Johansson via Instagram

After the slopestyle event Clif Bar got the party started with the official Whip Off! This semi—open event had pros and friends putting on a show with Monster Energy supplying the music. At the end of the session it was Utah native Reed Boggs who had the most style and walked away with the win.

Sunday July 14th featured the AirDH race presented by Fox Racing. 25 racers sprinted and jumped their way down the black diamond flow trail, the Joker, looking to find themselves in the Hyper Hot Seat. It was Okanagan local Bas van Steenbergen who topped the podium with a blistering run that put him 10 seconds ahead of Las Vegas native Bryce Stroud. For the women is was another Okanagan local, Vaea Verbeeck who came out on top with Revelstoke’s Casey Brown in Second and Las Vegas’s Jordan Scott in third.

“It felt good to take the win on the home course. The course was fast and it was a lot of fun.” – Bas van Steenbergen.

With the last event of the weekend in the books the inaugural Freeride Days at Big White Ski Resort came to a close. Our next event is the A'lpe Du Grande Blanc road bike race. Check out our events calender for more details. 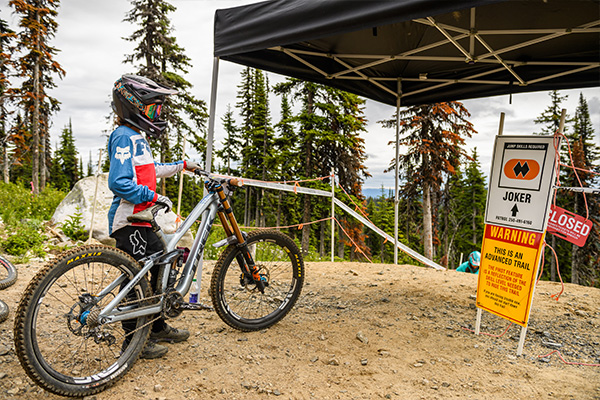 Photos taken by Andrew Jay. For more photos of the AirDH and the entire Freeride Days follow the link