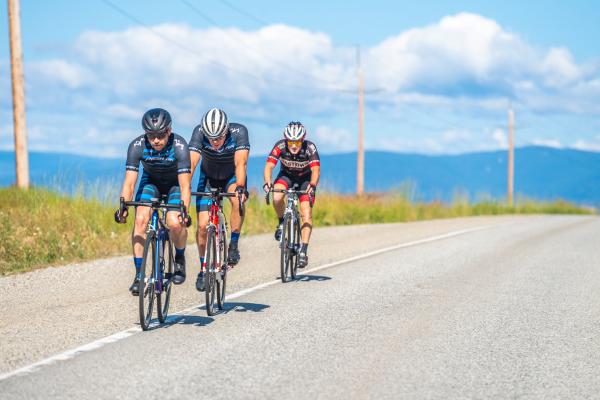 28-year-old, Tim Savre, has won the fourth annual L’Alpe de Grand Blanc with a time of one hour, 59 minutes and 15 seconds – 11 minutes behind the race record set last year by Jordan Cheyne. 27-year-old, Emma Lujan, was the first female to cross the finish line with a new women's course record of two hours, four minutes and 25 seconds, beating the old record by eight minutes!

In total, 141 cyclists rode in the 60km road bike ride from Kelowna to Big White with 1800m of elevation gain in between. The ride kicked off at the East Kelowna Community Hall at 9am and finished behind the Village Centre Mall as crowds cheered the riders across the finish line.

Keeping tradition alive, 82-year-old co-founder of Big White Ski Resort, Cliff Serwa participated alongside his granddaughter Kelsey Serwa, Olympic gold and silver medalist. Cliff and Kelsey’s goal was to finish the ride in under four hours and came in well under with a time of three hours, 20 minutes and 52 seconds.

Richard Loney and Emma Lujan won the King and Queen of the Mountain competition for the fastest man and woman to complete the Black Mountain section of the course earning themselves a Swagman bike rack.

“The day could not have gone any better. With concerns of air quality early in the week, the weather really cooperated today,” says Trevor Hanna, former race participant and vice president of hospitality at Big White Ski Resort. “We had excellent support from the local cycling community, our sponsors and Big White locals that all coordinated to make a great event.”

The race was followed by an awards ceremony in the Village Centre where Tim and Emma received their Polka Dot Jerseys, plaques and cash prizes provided by main sponsor Okanagan Springs. This was followed by a post-ride BBQ at The Woods with live music from Kelowna band, Linus.

Watch the race recap video below.